“Outback means different things to different people in different parts of Australia – deserts, tropical savannah, even wetlands – but what’s consistent is the idea that it is far from comforts of the familiar and the crowds of urbanisation. It is ‘beyond the black stump’ and it holds many surprises”

Visiting the Australian Outback last week was one of the most amazing, beautiful and most rewarding things I have done so far on the trip! With the beautiful, aboriginal, desert land, giant rocks and red sand, it is the ‘real’ Australia – and sitting in Starbucks in the middle of the city at the moment writing this, it really does seem a whole different world away. 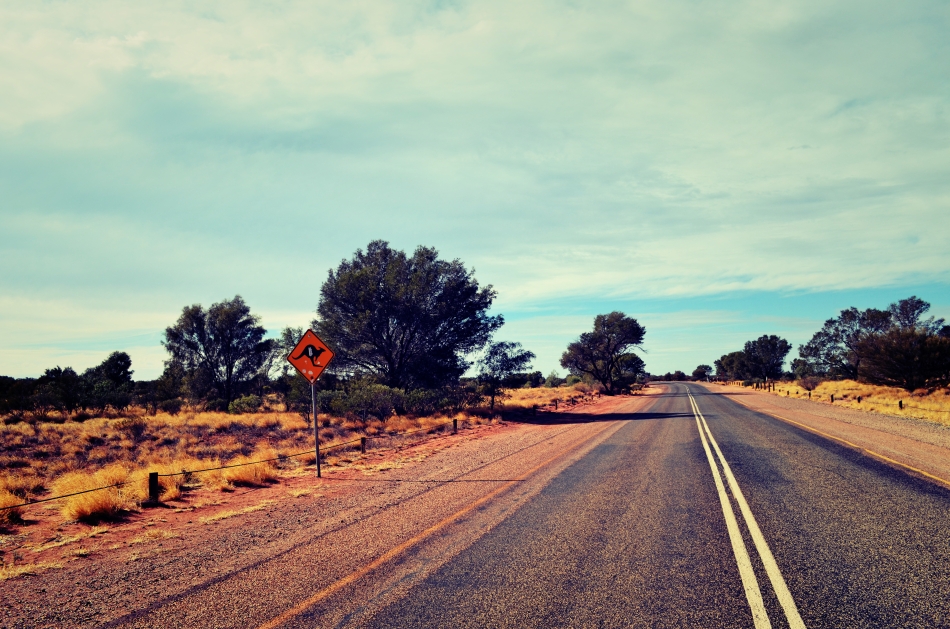 Like for the Great Ocean Road, we booked ourselves onto a tour, as we didn’t fancy driving for days through the middle of nowhere, relying on fuel, water and our navigational skills to get us there.

The 4 day Rock-to-Rock tour we booked was by Mulgas Backpacker tours (booked through Backpackers World Travel) and included trekking around Uluru and the less well known but equally as beautiful (and more popular, according to the BWT travel consultant) Kata Tjuta and Kings Canyon. 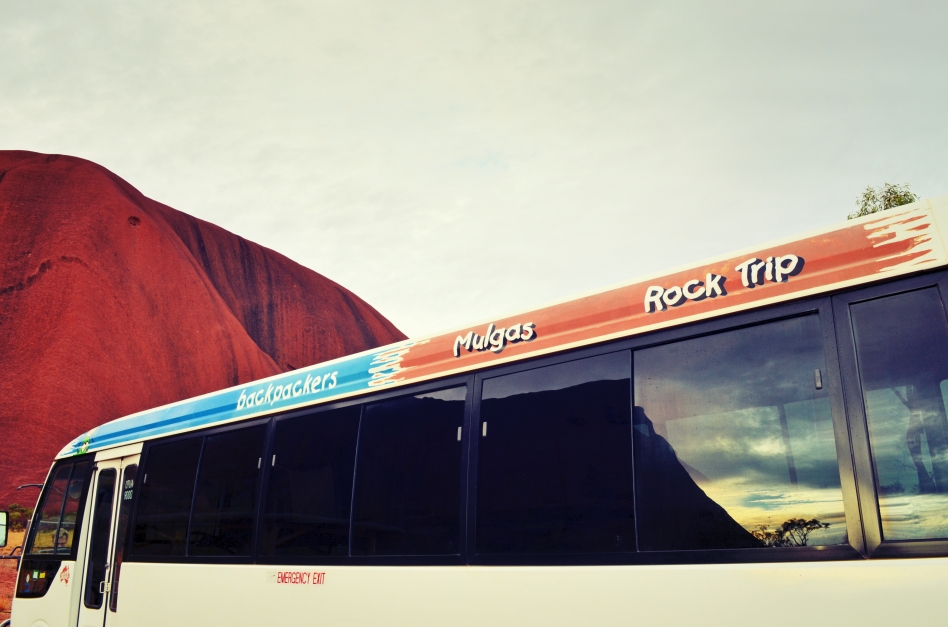 There are a few different options on how to get there: you can rent a car and drive all the way in from coast, you can fly in to Ayers Rock airport or Alice Springs airport and drive around from there, or you can do a tour. With the tour option, unless you’re going from Adelaide or a couple of locations on the East Coast, you’ll have to fly and pick up the tour from there. Flights are generally expensive (it can be up to $800 for a return), but as we were really flexible with time, I scanned a few months for the cheapest options and managed to secure some for just over $200 each! Then there are obviously so many different tour options and itineraries, ranging from camping to 4-star accommodation, but most of the accommodation near Uluru is based on the tiny complex of Ayers Rock resort.

If you can’t decide how to do it, I can’t recommend camping enough! It was actually my first camping experience ever (I had never been on camping trips as a kid and am not an outdoorsy person at all) – but it really was incredible and such an amazing way to experience the outback, sleeping under the stars and amongst the natural beauty of the country!

Our hotel for the night

After an early flight from Melbourne, we were picked up from the airport by our tour guide, an Aussie guy who lived in Alice Springs, and made our way to our first campsite, where as a group effort we prepared lunch and gradually got to know each other. 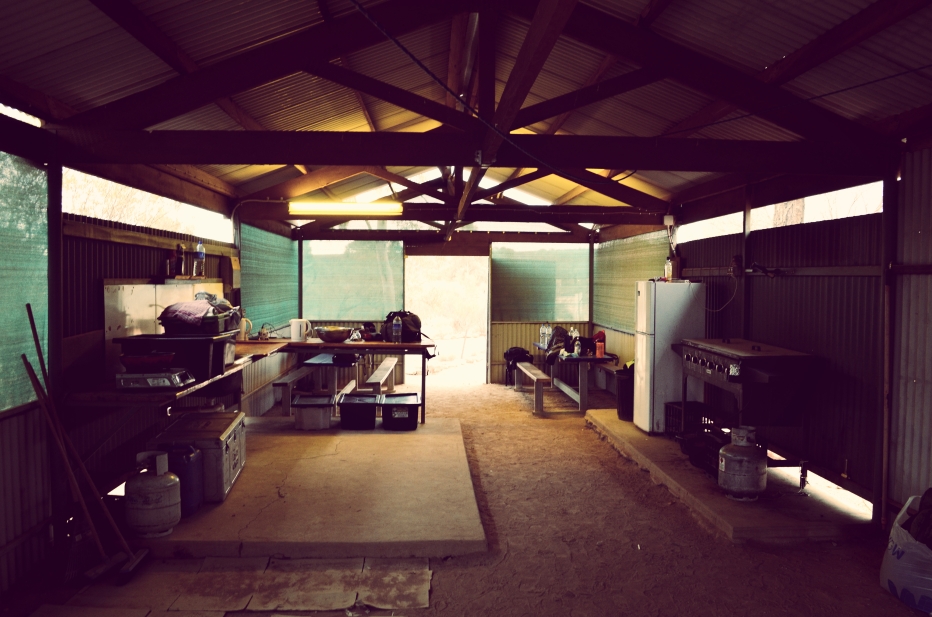 I think everyone was excited and keen to get to Uluru and see it up close, as we had glimpsed it in the background on the drive from the airport. That afternoon, after a fairly short drive, we arrived at the giant red rock and were left for the next few hours to explore. After seeing it so many times in photos, it was strange and surreal to be standing there at the bottom of it. It really is an incredible sight, its giant size and stunning red colour, standing in the middle of nowhere in the desert with nothing around for miles. I was surprised to find that you can actually climb it, as I had read that it was not allowed. It is seen as disrespectful to the aboriginals who own the land, but they do allow it. But our tour guide said you see a lot more of it walking around it, as once you get to the top of the rock all you see is the expanse of empty desert. So all of the group except one set off on a trek around the edge, a total distance of  about 8-10km, depending which route you took, as there was a shorter one and a longer one. Along the way, there were aboriginal ’sensitive areas’, traditionally belonging to either men or women exclusively, where no photos were allowed. 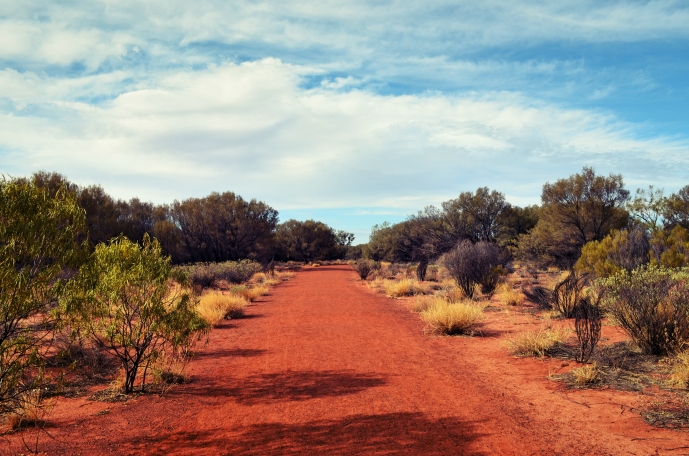 It was a beautiful hot day and nice to be able to take it at our own pace. But a couple of minutes into the walk, we found out what our tour guide hadn’t warned us about and that was the constant swarms of flies, who were so persistent you couldn’t leave your face alone for two seconds without them landing on you! Guess we’d have to get used to it for the next few days…! That evening before dinner, hungry but happy, we drove to another lookout point further away and watched Uluru with a glass of bubbly in hand as the sun set, casting a beautiful light onto it.

After a very hot, sleepless night and my first night sleeping outdoors, I was glad and half awake when our tour guide stirred us from our swags at 5am. We watched a cloudy sunrise over Uluru, before heading to our next destination: Kata Tjuta and the Valley of the Winds. And we soon found out why it had that name, as we headed off into the freezing tunnel of wind, wrapped in jumpers and leggings, which led us to the stunning domes of Kata Tjuta.

Sure enough, an hour or so later after the sun properly appeared in the sky, it was blazing hot and we regretted not bringing any sun cream with us, especially towards the end of the hike after the shade of the rocky paths, which was a long narrow sandy path with literally no escape from the sun. It literally seemed to go on forever! The low point was when I thought we were nearly at the end and we came across a sign which said it was another 2.4km back to the car pack end point! I think we walked about 10km that morning, which I was very proud of! 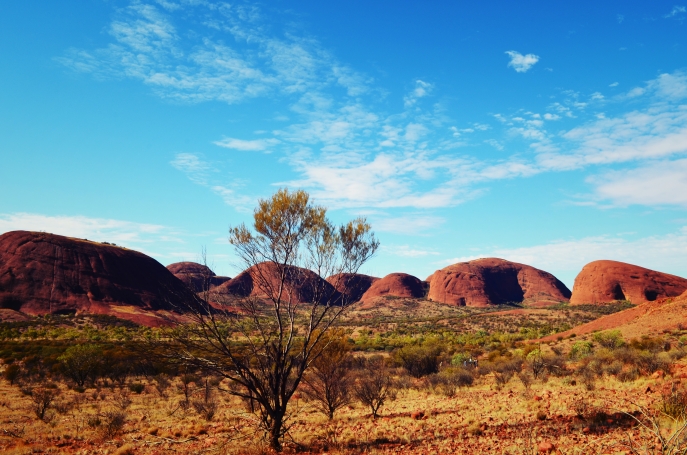 After a much needed re-fuel lunch back at our campsite, we headed off on a nice 3 hour drive to our next stop, passing Mount Connor on the way. I think by this point everyone was looking forward to a long drive and a good excuse for a nap, and the rolling desert landscape through the window definitely helped us drift off…After a fuel and drinks stop-off, where we had our first sighting of a wild dingo on the side of the road (!), we arrived at our new campsite for the evening.

We had a couple of hours of free time for showers etc and wandering around (although there wasn’t much to see at the campsite) while our tour guide prepared a proper Aussie outback-style barbecue of kangaroo steak, sausages, mash and freshly baked bread cooked on the campfire! And I’m not sure whether it was the exhaustion from trekking, the warm, hearty meal or that I was a bit more relaxed after surviving the previous night of camping, but I had one of the best sleeps that night – I was starting to enjoy my new swag home on the dirt!

This was our final full day on the trip and we headed off for the biggest trek yet – to the top of Kings Canyon to do the ‘Rim Walk’ around the edge. I don’t think anyone was feeling full of energy – I definitely wasn’t – when we set off at about 6.30/7am…and seeing the steep ascent ahead of us made me even more tired! But after the first 10 or 15 minutes uphill, we reached the top and it wasn’t so bad from then onwards.

We walked up steep, rocky paths, past waterholes, gazed down at craters beneath, all the time surrounded by the most stunning red backdrop. It was so beautiful! 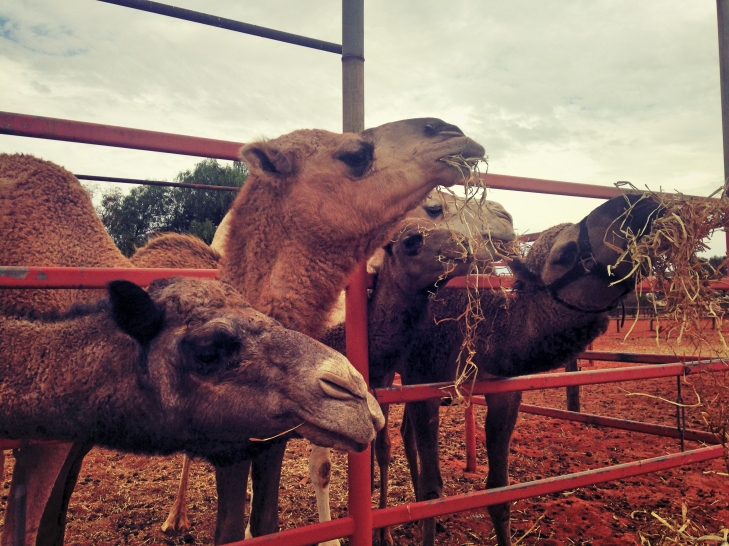 The locals around the campsite

Late morning, we headed back to camp for a bit of lunch and free time to wander around, visit the campsite’s camels, and most importantly stock up on water before we drove off to our next and final site, which our tour guide warned us was very remote!

As we arrived, he introduced us to the ‘toilet facililites’, a hole in the ground with 3 pieces of metal around it for privacy. There was no electricity (except solar) or running water – I’m not sure I could have done it for any longer unless we were more prepared, but it was really fun and was actually my favourite evening of the trip! After eating dinner in pitch black, we spent the evening sitting around the campfire, chatting, listening to music and toasting marshmallows, until we finally settled into our swags for the last time and fell asleep to the sound of the pouring rain over our heads.

Tired, dirty and hungry, the next morning we headed off early to our first campsite for showers and breakfast, before a drop off at the airport, where everyone said their goodbyes and headed back to their other non-camping lives!